by Tony James
in Electronics 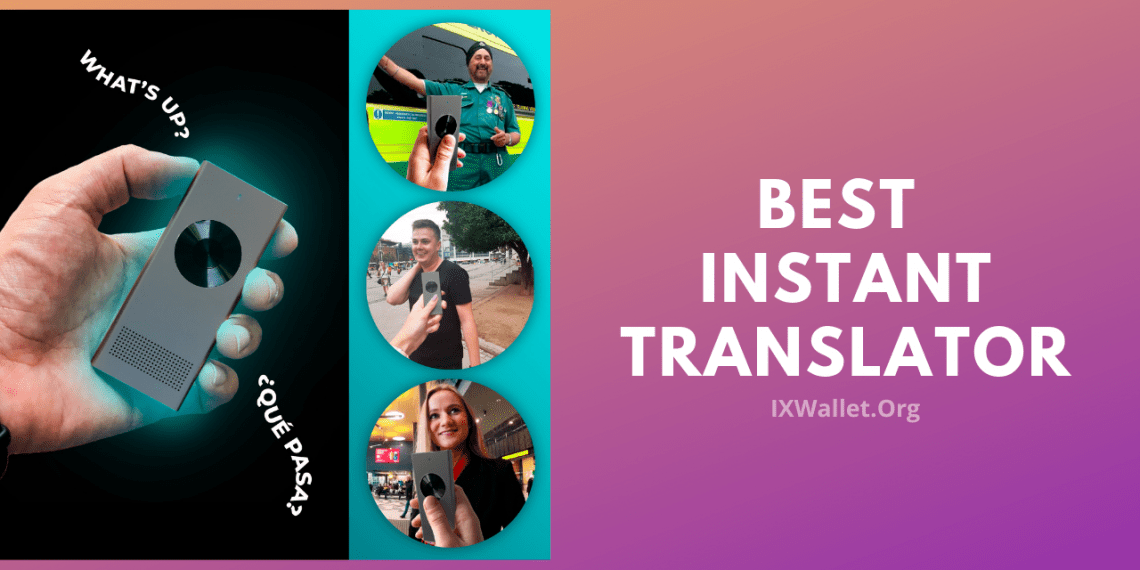 We all have to travel occasionally, whether for pleasure or business. Although we are all currently confined to our homes due to COVID-19, we will eventually be free to roam the earth. When we do so, we open ourselves up to new sights, sounds, and knowledge about cultures other than our own, which helps us grow as individuals and professionals. Instant Translator might help you in such cases.

The only issue is that language might act as a significant barrier between us and the vibrant individuals we meet along the way. It is impossible to know hundreds of languages on your own, which is why technology can assist you.

Today, a range of portable translation devices are available to assist in providing real-time language translation so you can understand what someone is saying. You no longer have to scratch your head and say, “I’m not sure what you’re saying.” Now you can see and comprehend the world.

What is an Instant Translator?

An instant translator device is a handheld electronic device that can translate spoken words or text from one language to another in real time. These devices are becoming increasingly popular as more people travel to countries where they do not speak the local language. There are a number of different brands and models of instant translator devices on the market, but they all work in essentially the same way.

To use an instant translator device, you simply speak into it in your native language and it will translate your words into the desired language. Some models also have a built-in dictionary so you can look up words if you need to. The vast majority of these devices are battery operated, so you’ll need to make sure it is fully charged before you leave on your trip.

While an instant translator device can be a helpful tool, it is important to remember that it is not perfect. The translations it provides are usually close but not always 100% accurate. Additionally, these devices can be quite expensive, so you’ll want to make sure you really need one before you purchase one.

Choosing a portable translator might be a difficult undertaking. This article is intended to assist you in comprehending the various aspects of a pocket translator so that you can determine which one is suitable for you. This article will discuss all aspects of a handheld translator, from ease of use to the number of languages supported, as well as translation quality and other functions

To begin, a language translator will assist you in comprehending your conversation partner. As a result, it is critical that you purchase a device that supports the language(s) you wish to translate. Bear in mind that while you may not require specific language assistance at the moment, you never know where your next trip will take you. Consider purchasing a pocket translator that covers as many languages as possible, so that you are never in a scenario where even your pocket translator is at a loss for words.

How does the translation device determine which translations are correct and which ones are incorrect? This is where artificial intelligence enters the picture. AI can be trained to distinguish between accurate and less accurate translations and to pick which to utilise in particular situations. For the greatest translation results, look for an AI-powered translator. This manner, your pocket translator becomes more intelligent with each use.

There are two types of translation devices. While they appear to perform the same function, it’s critical to remember that while stand-alone devices can translate without the use of an additional phone + software, app aided devices always require the presence of a phone running a particular app.

You’ll need to pair your app-assisted translator with your phone over Bluetooth and control it using the app.

While these app-assisted translators may be less expensive than standalone versions, they are significantly more difficult to operate, requiring you to juggle your phone, an app, and the gadget simultaneously.

Traveling may be a noisy experience. Whether you’re at a bustling bazaar, haggling over an antique lamp, or conversing with your cab driver from the back seat, you want your discussion to be simply picked up by the pocket translator’s microphone and the speakers to be loud enough for you to hear the translation as well. Look for a portable translator that features dual noise-canceling microphones to ensure that each word is captured clearly and precisely. When it comes to the speaker, anything 5W or greater will deliver crystal clear playback

When it comes to screens, go for touch-screen gadgets. This significantly simplifies the process of using your digital translator. Simply tap on the languages you wish to translate to begin. You want something large enough to read the translations easily without sacrificing portability. The sweet spot is 2.4 inches.

During a conversation, rapid translations are critical. That is where a capable processor comes into play. The current generation of universal translators incorporate quad-core processors. The ideal solution for near-instant translations.

A portable translator should be simple to operate. Consider pocket translators that support your native language as the system language, allowing you to access all menus and settings in your home tongue. Additionally, voice commands are a fantastic function to have. You can select which languages to translate using voice commands by expressing a command such as “Select English to French”. The translator will then choose between the two languages automatically.

You certainly do not want to run out of battery in the midst of a call. A large battery will be helpful in this situation. 2500mAh and above will provide several days of autonomy.

When using your pocket translator offline, you will have access to a restricted number of languages, and translations will be more accurate when utilizing simple words or short sentences.

Fortunately, maintaining your translator’s web presence is not as difficult as it sounds. If WiFi is available, simply connect to it. Additionally, you can share your phone’s connection via mobile Hotspot.

Thus, here are the top considerations before you buy the best translator device. If you have any doubts, you can let us know in the comments section below.